The fist should be an
almost perfect rectangle

The Fist is the most important weapon until one learns to use palm strikes effectively along with Iron Palm training. Our fist is called the sun fist in other kung fu styles because it is shaped like the Chinese character for sun, (a vertical rectangle with a horizontal line through the middle).

The last three knuckles are used in the strike. The fist should be in line with the arm, not cocked down. Cocking the arm upon striking is dangerous because when you hit the target you may misjudge and hyperextend your wrist on contact. If your wrist isn't straight on contact it might bend to the right or left causing pain making that hand useless. The fist should be squeezed tightly to avoid injury to the hand and to make a more solid and formidable weapon.

Punches should be executed by punching fist over fist so as not leave spaces between your punches. Generally the defending hand stays in the centerline, and the striking hand uses the centraline to attack.

Panic can cause tunnel vision blocking one's peripheral vision. This often happens to combat soldiers and law enforcement personnel. (In Chinese, Qi or, Chi (Mandarin), Hei (Cantonese), Ki in Japanese can mean breath or life force). All living things have Qi. The acupuncture meridians are the pathways for Qi. The acupuncture points on the body are where Qi accumulates.

Stance - The Wing Chun footwork/stance training is very important because if the exponent is not properly positioned, the hand techniques will be ineffective.

In our first form, Siu Lim Tao (small idea) your feet and hips should face directly forward. This position is only used to practice the form. In an actual combat situation your feet and hips should at a 45-degree angle to your opponent offering a smaller target. If you can picture the 5 poles that make up the plum flower pattern, your feet should be on the bottom two poles in what is called, the side neutral stance.

The right front stance would mean having the right foot on the upper right pole and the left foot on the lower left pole and vice versa. This stance may seem to leave your groin open to attack but since you are not going to be in a static stance you will be able to cover your center simply by raising your leg or by shifting your stance. Your lateral balance will be compromised if you stand on a straight line as in walking on a tight rope.

Some Wing Chun styles drag the foot when advancing. Dragging the foot is like driving a car with the emergency brake on. Plus, it would be impossible to drag your foot while fighting on the 'Mui Fa Jong'. (The Mui Fa Jong was used to fight opponents on.) 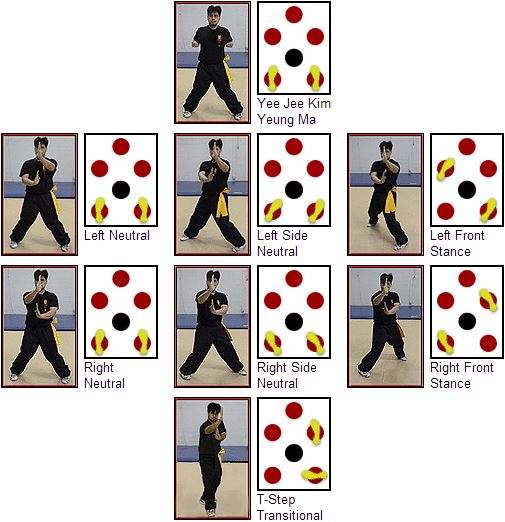